Nottingham’s first BarCamp was held over the weekend in the awesome NottsHack space. Like many smaller regional BarCamps, I enjoyed it for its friendly atmosphere and relaxed feeling. The sessions were quite varied, with quite a few non-technical ones on the board. Talks I attended on Saturday included: 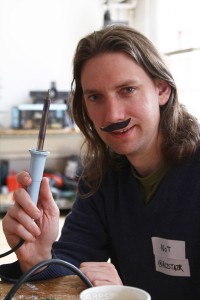 Sunday was rather more practical in terms of which sessions I went to:

I ran a session about my recent adventures into the world of High Speed Flash photography, which was well attended. You can view my slides from Slideshare here – although they make more sense if you’re listening to my chatter as well 🙂

Photos From The Weekend

Here is a selection of the best pictures I took – as you can see, much fun was had by all: