Last weekend saw the third BarCamp Blackpool with geeks convening from north and south for a visit to the seaside. I met up with @alistair, @leeky, @thehodge, @hevamb, @martin88 and @mick_cunningham; together we all but took over a little B&B for the weekend. It was very close to the Pleasure Beach and convenient for most of the sights.

After a walk down the prom followed by meeting up with some other later arrivals, we enjoyed some food and a quick beer before heading to bed for an early night – I for one need my beauty sleep and left the hard-core partying to the more adventurous geeks who were staying nearby. 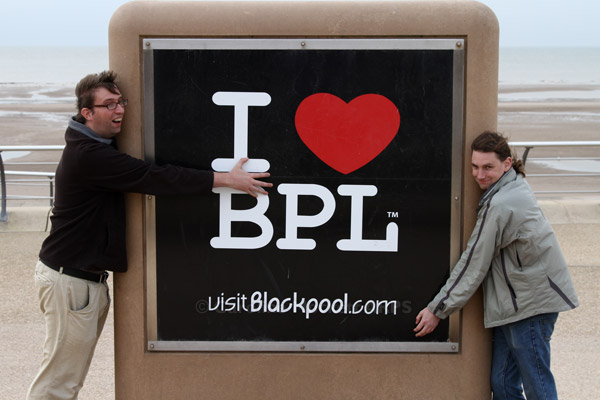 Leeky and Alistair give BPL some lovin'

Saturday dawned bright and sunny (the weather has been great for the past two BarCamps too). After a hearty English Breakfast we headed over to the Pleasure Beach to sign in and get our electrical gear safety tested. Alistair had bought a soldering iron especially! Thankfully, Gemma didn’t throw him out for this! 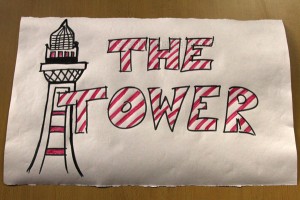 The sessions were short this year – a mere 20 minutes with a 10-minute turnaround. Whilst this may be good for the first-timer unsure if they can fill half an hour (and also good for getting as many slots as possible into a 4-room venue with 140 attendees) a lot of folks felt this was a bit short. Some talks had barely got into their stride before Gemma came around and cracked the time-keeper’s whip. It is a delicate balance between timing, rooms and sessions, and I wonder with such a big turnout this year whether a venue with more smaller rooms is a better way to go in future? I have no idea if such a venue exists in Blackpool so it’s easy to say but harder to pull off…

I enjoyed lots of sessions during the day. First up was a discussion on Agile development lead by @dchetwynd. I found this a bit bemusing as the discussion was partly underway when I joined. But more so because, as a lone freelancer who rarely works with others on a project, the concept of pair-programming and the like was a little alien to me. Still food for thought however. 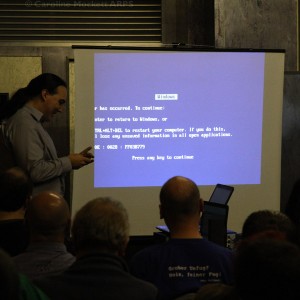 The lovely Blue Screen Of Death!

The next was fun session on the History of Computer Error Messages. The guy speaking was brave foolhardy enough to attempt a live demonstration of a Spectrum loading from tape. Under normal demo conditions, this is the kiss of death and nothing works. But of course, despite failing several times during rehearsals, once in front of an audience, the machine behaved impeccably and showed no error! Argh! This was one such session which had barely got into its stride before it was time to call it a day.

@cubicgarden talked about sex again – more specifically, the etiquette of who should pay for a first date in the 2010’s. The general consensus amongst the audience seemed to favour going Dutch, but this has not been Ian’s experience generally.

For reasons best known to himself,  @alistair suggested we should try to make a pop video. No, don’t worry, not the moving-pictures variety but showing a succession of stills to illustrate a song. Hard enough in 20 minutes – we required a bit of extra time during lunch to complete some of the photos and he spent a while after the BarCamp doing the editing. We chose the song Rollercoaster by B*Witched (thanks Gemma for that suggestion!) – well, we were sitting next to one at the time, so I suppose it made sense! Here’s the finished article: 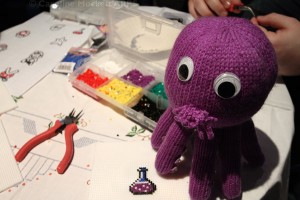 After our lunchtime rations (three small sandwiches and a modest portion of chips each), the afternoon swung into action. I joined the Nintendo-themed Craft workshop to make an 8-bit fridge magnet out of tiny Hama beads. Fiddly but fun! I had some help from my new little friend Otto (skillfully knitted for me by @catashton).

For the newbies at BarCamp, there was a session which explained the rules of Werewolf. I was sitting at the back sorting some pictures during this one, but did briefly prowl around (at the appropriate moment) wearing my lovely new hat, which was christened Diefenheader. 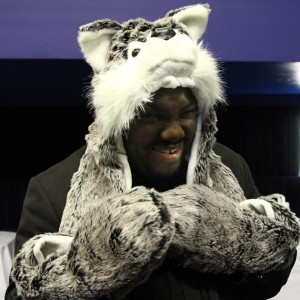 Ian gets to know Diefenheader

It scared Ian out of his wits when I snuck up behind him! But he later made peace with it…

We weren’t confined to the venue all day – as well as sneaking out for some photos for the video, we also had the opportunity to watch the Physics Busker perform on the prom nearby. He was demonstrating little rockets made with bicarb and water mixed in a little fillm pot and shaken up. Placed cap down, enough pressure builds up until it can be contained no more – POP! – the missile fires into the air.

The Physics Busker prepares his ammo

We were kicked out of the venue briefly while they set up for the after party, but this gave us the opportunity to take all our stuff back to the B&B and travel light for the evening. As usual, there were plenty of free drinkies available thanks to the generous sponsors, and lots of nosh too. I’m not so sure Rock Band worked for those not participating – at times, it was so loud it was difficult to talk to someone sitting next to you… previous years have had a magician for the entertainment, which I think worked better as it involved the whole audience rather than just a handful at a time.

All in all, an enjoyable BarCamp and fun weekend in the North West. Thanks to @ruby_gem and @biglesp for all their hard work in organising.

Here is a selection of my photos from the day: