Friday and Saturday saw the 2011 incarnation of Over The Air take place at just about the geekiest venue possible – Bletchley Park, home of the National Codes Centre and National Museum of Computing. It’s the first time I’ve been to an OTA event. I must admit that the venue had a lot to do with it – but also tales of previous years’ fun and games. I’ve been to Bletchley before (during a Big Geek Day Out in 2009) and was very happy to return. 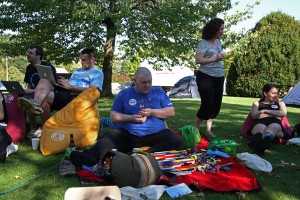 There were plenty of talks and sessions to go to in the mansion, whilst other geeks were just happy to sit in the sun and play with Lego. We were like pigs in you know what once @matthewcashmore was brave enough to give us some power on the lawn, thanks to a portable generator! The only issue was the wifi, which seemed to be rather flakey. A pity, because obviously it’s difficult to hack without access to the internet. I understand that previous OTA’s have always had impeccable wifi, so it was a shame. I’m not complaining though – I spent much of the two days “disconnected” anyway, only checking Twitter briefly by 3G. It’s nice to have a rest sometimes – I’m not addicted, honest! 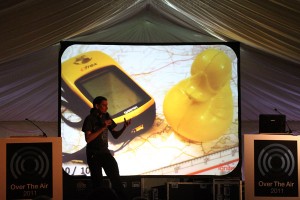 Mr Duck - there in spirit 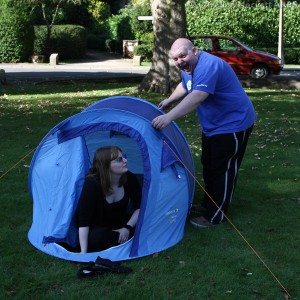 Hev being rattled by Hodge 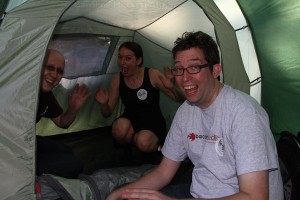 Hello Campers! Cristiano, Mel and Leeky in their tent

Friday evening’s entertainment was provided by some excellent Ignite sessions from, amongst others: @billt (on Digital Public Space); @alistair (on his Metro Simulator); @edent (on QRpedia) and @Ewan(on all things Eurovision). There was also plenty of beer, pizza and lasagne to keep geeks coding through the night. Some decided to pitch camp on the lawn in front of the main house – certainly a very cool campsite!

What have I let myself in for? 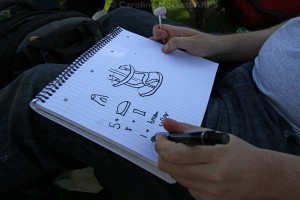 Since I didn’t have any better ideas for a hack over the weekend, @Leeky press-ganged volunteered me to help him and @Ewan build a hardware version of the Enigma Machine called Enigma Kerplunk.

What could possibly go wrong?

Instead of wiring and cogged rotors, we decided to go for the full Wallace & Gromit approach and build ours out of plywood, garden hose and plastic cups. The “signal” through each path was originally planned as dropping a marble down the pipe, but standard garden hose from B&Q isn’t big enough for your average marble to pass without resembling a snake swallowing its breakfast. So – what to use insted? Ballbearings? Nope – couldn’t find any in said B&Q. But then we thought of those teeth-breaking ballbearing-like silver ball cake decorations and we had our solution! 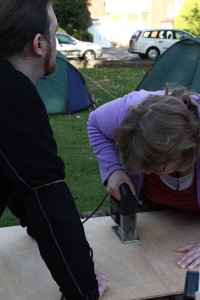 Oh no! Who let me loose with the power tools? 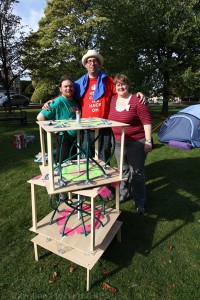 After enjoying too much beer and sunshine on Friday, we didn’t actually get anything built (although we did manage to source most of the materials). So Saturday morning dawned, and after feasting hugely on a Full English Fryup in the marquee (#win #win #win) and watching a few minutes of the England vs Scotland rugby on the big screen (#win – eventually!), we set to work building the contraption.

For a while we became an entertaining side show as geeks passed from the mansion to the marquee in search of tea and talks. But we carried on regardless.

And then it was done!

The hack itself was presented after all the competition entries whilst the judging was taking place – yes, we were the cheap interval entertainment! 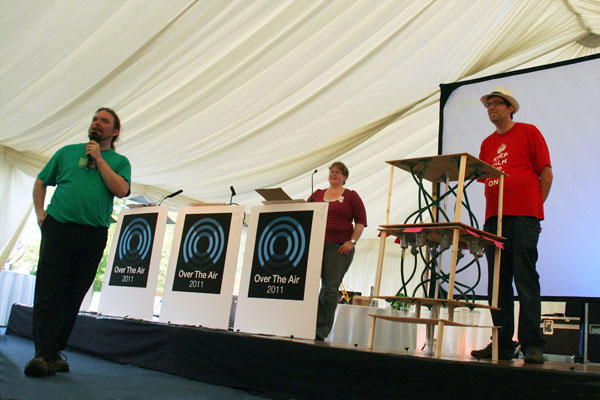 It went well. Apart from only some of the pyros going off. Ooops. Tread carefully until the rogues were made safe and removed…

Several of my other hacking buddies did well in the competition, winning anything from Lego Mindstorm Kits, a Drone, books, Amazon vouchers and big fat wads of cash. Well done peeps – you know who you are!

It was heaps of fun and I really do hope that OTA decides to return to Bletchley for next year’s event. We were terribly lucky with the weather, having two days of scorching sunshine to play in. But a huge thanks must go to the staff at Bletchley Park for letting so many geeks run amok, camp on their lawn and screw things into their picnic benches.*

You can see the rest of my pictures here: