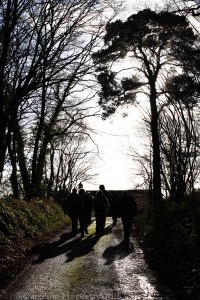 A Posse Of Geeks, Geocaching

On New Year’s Day I spent some time with geek friends in Sussex doing some geocaching. We didn’t walk very far, but there was rather a steep hill involved. By the time I’d waked down the road and climbed back up it, I was knackered and out of breath. It was then that I decided something needed to be done.

Coincidentally, I got a FitBit One for my birthday and have been using it to monitor my activity ever since. It’s recommended each of us walks at least 10,000 steps per day. That’s about 5 miles. You may think that’s hard to achieve, and if you work from home in a sedentary job, you’d be right. On a lazy day, I had trouble getting up to 1,000 steps. Rubbish!

I realised that you don’t have to do all 10,000 steps at once. (Five miles takes about 80 minutes for me if I’m doing it in one hit). I had a lot of work on during January which meant I had to be at my home office desk during office hours, so could not afford the time to walk 5 miles all in one go while there was daylight. Plus the weather was pretty awful. So how did I achieve my goal? Using a simplification of the Pomodoro technique, I would set a timer to go off after 50 minutes of each hour. During those 50 minutes I concentrated solely on the tasks at hand and didn’t get distracted by email, Twitter, or other frivolity. It was very productive.

Once the alarm went off, I would have the next 10 minutes to make a cup of tea, check Twitter on my phone – and most importantly – get off my but and walk about. Either round the block (which took about 8 minutes) if the weather wasn’t hideous, or up and down in the house if it was too awful to go outside. Each of these sessions would easily wrack up about 1,000 steps, plus at least one floor climbed to get back up to my office at the end of it. 10 of these a day and I’d easily accomplished my goal!

One month in, and I’m finding the stats are pretty interesting. The first graph is daily distance (in miles). Next up is calorie intake (pale green) and calories burned (dark green). As long as you’re expending more than you’re eating, you should start losing weight, right?

The next graph is body weight. I’m not showing you the absolute values (still a little shy for that) but you can see my steady downward progress and the actual weight loss across the month. The dotted line is my ultimate target weight; again the vertical axis is not to scale.

Finally, there’s the sleep graph. The FitBit One, if worn in a special arm band whilst asleep, monitors how often you wake up and how long you slept. 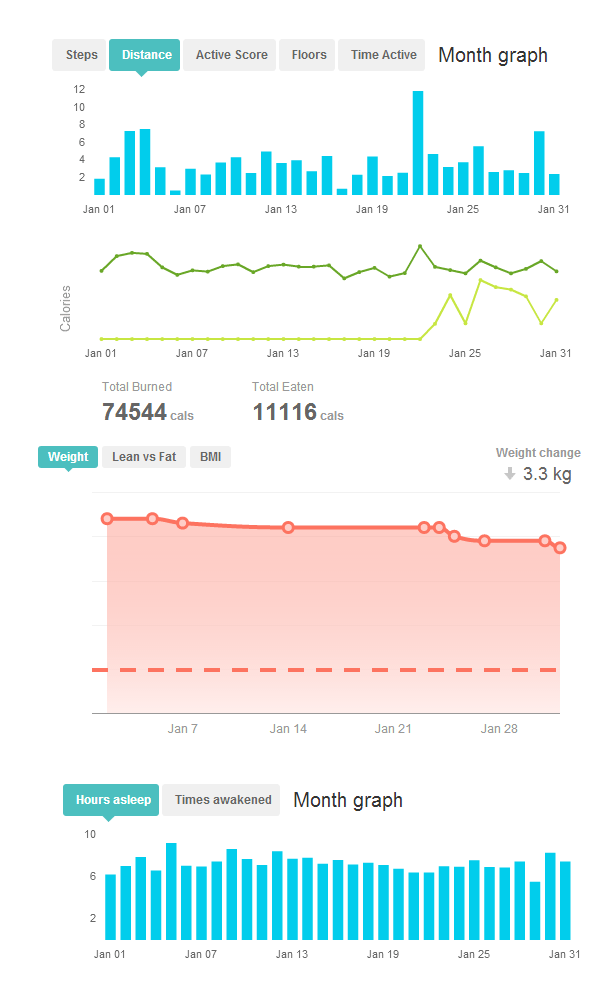 It wasn’t until the latter part of the month that I decided to use the iPhone FitBit app to record my calorie intake each day (which is why the calorie intake graph is flat for the beginning of January). And I’ve also begun to observe 2/7 days a week with only eating 500 calories to try and give my weight loss a kick start.

I’ve been on various diets a few times in the past, and lost weight before. Then gained it again. I can’t seem to be on a permanent diet because it’s just BORING, and every time I fall off the wagon I feel bad about it, get disheartened and tend to give up.

Doing 2/7 days @ 500 calories isn’t rocket science, and two days a week being “ultra good” I find manageable, if it means I’m not beating myself up the rest of the time over what I’m eating. On the other 5 days, I’m recording my calorie intake, but I’m not limiting it. That’s a bit psychological difference in my book.

I’m still having a few drinks, eating crisps and chocolate. Fish and chips are OK. Cake sometimes too. They are not forbidden, and I don’t get a guilt trip when eating them like I have on previous diets. I can see that this sort of change could become much more long-term than those I’ve done in the past as you’re not spending every day wondering if you’re allowed to eat this or that.

In the past 3-4 years, I’ve not weighed myself very often. On 1st January I stood on my old analogue scales and got a shock. Heaviest. Weight. Ever. 🙁

I decided early on not to weight myself every day, as it could get rather obsessional. Also, if I went up in weight by a pound or two, I would not record this on the app, but just wait until I’d lost it again (and more), before logging my new weight. You may think that’s a bit of a cop out, but I find it works better for me because the overall trend is downwards, which psychologically is more encouraging. It’s not cheating if you’re actually losing the weight in the end, anyway! Weighing myself after a 500 calorie day tended to give more encouraging results too!

So, I’m really pleased to have lost 3.3Kg this month, thanks to upping my activity and looking closely at what I eat. Let’s hope it continues…