Browser Wars or Spoiled For Choice?

Two new browsers have launched in the same week. As Olly says, it’s a bit like London Buses. First a drought, and then they all come at once.

As a regular user of FF1.5, I was keen to get the 2.0 release and like the slightly “shinier” look of the browser – someone’s polished the chrome!

I found an excellent article on tweaking Firefox, and have done a little customisation to make myself happy with it. One thing I was having trouble with – the new version put an “X” on every tab to close it, whereas 1.5 just had the one at the righ hand end of the tab bar.

Fiddling with the browser.tabs.closeButtons parameter, and setting it to “0” just gives you the close button on the active tab. Much better!

The browser.tabs.tabMinWidth default is 100[px]. If you have many tabs open at once, you end up with scroll arrows in the tab bar, and only get about 7 tabs across by default before this happens. Changing this parameter to 75 gives you about 10 tabs before they start scrolling.

I like the “Recently closed tabs” in the History menu too – how many times have you closed a tab, only to think, “damn, I wanted that one”? Restore it quickly via this menu, and voilà!

Setting browser.urlbar.hideGoButton to “true” (default false) will get rid of the annoying green arrow next to the address bar. Personally, I never use it, I’m in the habit of bashing “return” once I’ve typed in a URL.

There are other new features, but I’ve yet to fully explore them.

I’ve been waiting in trepidation for Microsoft’s latest browser to be released. Yet ANOTHER browser us poor web developers will have to take into account when testing our sites. Yesterday, I bit the bullet.

No troubles in downloading the update, or installing it (thankfully!). Similarly, I went and trawled the evolt.org browser archive for a standalone version of IE6. I’ve heard some people have had problems with these standalone versions, but thankfully, no aggro as yet. So I’ve now got IE6, IE5.5 and IE5.01 on my PC too. Along with Opera, that has most of the major PC browsers covered.

Looks like none of my sites have major issues in IE7 – thank heavens! But I would have been surprised if they did – most were designed with standards in mind (IE7 is just catching up with the standards used by Firefox for years), and I haven’t got loads of IE-specific hacks lurking in my code.

Two things about IE7 I do like, and don’t think Firefox2 has (let me know if I’ve missed these options buried in FF somewhere):

the browser gives you a large thumbnail of what each tab’s page looks like. A bit trivial if you have lots of different sites open, perhaps, but useful if you quickly want to tell the difference between several pages from the same site. The thumbnail display looks like this: 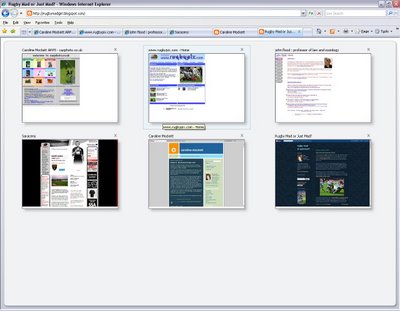 And secondly, with accessibility in mind, IE7 will actually zoom the whole page, rather than just text. So if your standard page looks like this: 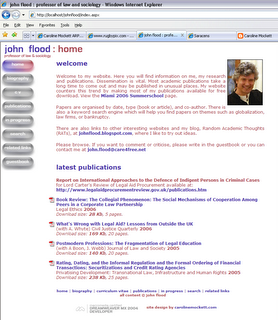 Once the page is zoomed, even up to 400%, it makes a pretty decent job of rendering text in graphics at this larger size (click the image below to see an actual-pixels version): 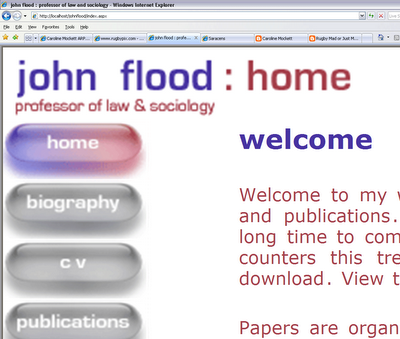 I’m sure there will be little niggles and glitches which become apparent as the web community gets used to these new browsers. For the moment, although I see IE7 as a massive improvement over the crusty old IE6, I don’t think it’s quite persuded me to swich from Firefox as my default browser. And that’s largely to do with the developer extensions and addons I use. Perhaps for a regular surfer, it would be enough.

Finally, A Night At The Opera

Lastly, I’ve just downloaded the upgrade for Opera, now version 9. The Opera website details what’s new in Opera9. Haven’t really had a chance to look at this in depth, but it’s always good to have another browser option to test.