Generating RSS
I’ve been meaning to get some rss feeds sorted out for my photographic sites for some time. There were some technicalities which I was wracking my brains to overcome, and for a while, I couldn’t make up my mind which format to support. But in the end, it only took a couple of dollars to pull my finger out – I found a great tutorial at CommunityMX about blog authoring, which gave me the final push.

I also found the rss2.0 specification and feed validator for Atom and RSS invaluable in getting a valid feed sorted out.

Where Are My Feeds?

Feed Reader Interpretations
One thing I’d not really taken much notice of, as a consumer of other people’s feeds, was how various feed readers actually present the information. But once I started authoring feeds, it’s become a bit more obvious how each aggregator parses the xml file to display the feed. Some will only show 20 posts (no matter how many are actually in the feed), others keep a cached copy and don’t seem to want to update the feed if the order of posts hasn’t changed but the layout and content has. All rather frustrating if you’re trying to author a feed and test it!

Some Anomalies
First off, Bloglines keeps a cache of the feed, and so it’s only showing an early version of the rugbypix feed (without thumbnails) in this screenshot: 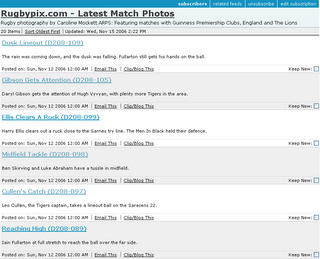 Also, if a feed has 40 items (I sometimes post a large batch of images so didn’t want to limit the feed to the last dozen or so), it only shows 20 – the oldest 20. So when other feed readers show the last two matches (40 images = 2 games, 20 images each), Bloglines will only display the last but one game’s pictures, not the latest 20. [Add: between composing this and actually posting it, Bloglines has now caught up and refreshed the feed – but it did take about 48 hours!]

The cazphoto feed looks a little better (I’d got the hang of formatting by now): 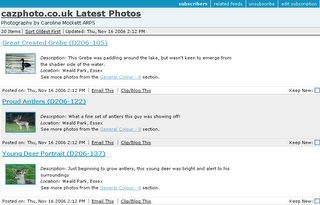 Next we see what it looks like in YahooMail Beta feed reader: 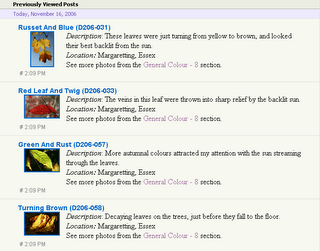 Quite a nice presentation, but it doesn’t show the date up very well. 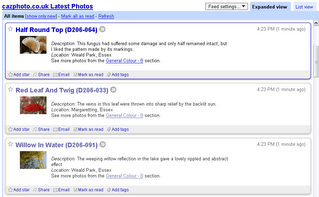 Plus it offers a cutdown list view if you so wish: 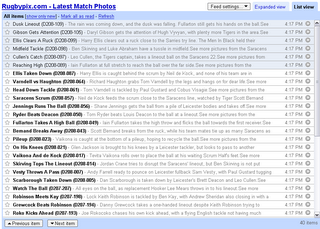 I also tried the Sage plugin for Firefox, which gives yet another take on the display, showing a 3-pane affair, feeds at top left, item summary of feed in bottom left and a rather more snazzily-laid out view of each item in the right pane: 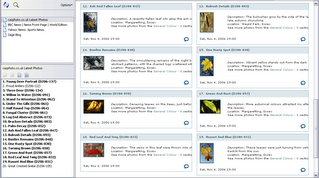 So there we have it – a small sampling of feed readers. What’s your favourite feed reader, and how well does it render your chosen feeds? One final (surprising) thing I found out during my investigations was that the standard Flickr Photo Feeds don’t validate! Oops!

Publicising Your Feed
It’s no good having a feed and no-one knows it’s there. Adding a suitable link (often showing the

icon) to your website can help. Also, add a link in the head of your page to tell feed readers your feed is available. This takes the format:

Third Party services such as pingomatic can also help raise the profile of your feed. Happy pinging.