Mid-March saw BarCamp Brighton 2, held at the University of Sussex just outside Brigthon. I didn’t take many notes at the event as it happened, but I did enjoy the presentations. These included:

Tom Morris telling it straight [see right] about his thoughts on the Social Graph. He also did another talk on RDF on the Sunday, which was informative, as usual.

Leeky‘s session was about hacking your own PBX phone system, another great talk with plenty of demos and the usual animated hand-waving 😉

There was an impromptu drumming jam session in the main auditorium, which let out a bit of pent-up energy, and showed the rhythmic ones amongst us what fun it was.

Some folks were hardware hacking with arduino boards – not sure what got made in the end, but there were a few burned fingers from those getting too close to soldering irons!

This time around, my talk wasn’t terribly well attended – I had one appreciative audience! Never mind, at least I participated (and got it out of the way on Day 1 so I could enjoy the rest of the show!). I must admit, I hadn’t prepared a great deal, but decided to do a slide show from some of my Project366 images which I had taken up to today’s date.

Neil “workingwithme” Crosby held a session about TwitterBots, again great info and interesting graphics! Not sure I’m up to hacking a TwitterBot together, but it was good to know the sorts of things that can be achieved.

There was the usual geekery taking place too, here are some more photos to prove it: 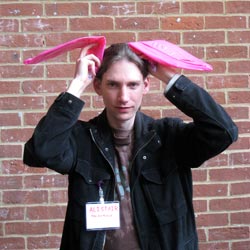 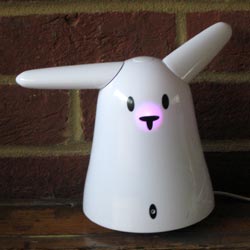 [Spot the difference: Alistair (right) pretends to be a Nabaztag bunny (left)]

[A view from on high, looking down from one of the conference rooms to the Common Room, where most of the inbetween geeking took place]

While I was in Brighton, I was also able to visit a couple of Flickr mates who are also doing the Photo-A-Day project. It was nice to finally put names to places. My photos from the weekend included A Fallen Star, Faded Grandeur, Enigma V and Verdant Shades. All in all, a most enjoyable trip to the south coast.