I realise I’m hideously behind with blogging about lots of geeky stuff, but here goes. Apologies if you were expecting this sooner!

This year’s dConstruct was a lot larger than I was expecting: the last time I went in 2006 there was a comfortable number of folks there, and it felt really friendly. I didn’t go in 2007 as it clashed with the Rugby World Cup opening game in Paris. But this year there were about 500 attendees who gathered at the Dome in Brighton for the event. I found it a little difficult to find people, even though I knew they were there, as there were so many folks milling about during the breaks.

Here are a few photos I took during the event:

[Above] Aleks Krotoski on Playing the Web: how gaming makes the internet (and the world) a better place. Listen to the audio (mp3).

Daniel Burka [below] talked about Designing For Interaction. Listen to the audio (mp3).

Next up was Tantek Çelik, talking at length about Social Network Portability and how Microformats can help you to take your friends with you to a new network. Listen to the audio (mp3).

The two Matts, Biddulph and Jones, [below] did a two-handed presentation called Designing For The Coral Reef. They talked about “delighters” – little things which are present in design which can really make the difference to the user experience. Listen to the audio (mp3). 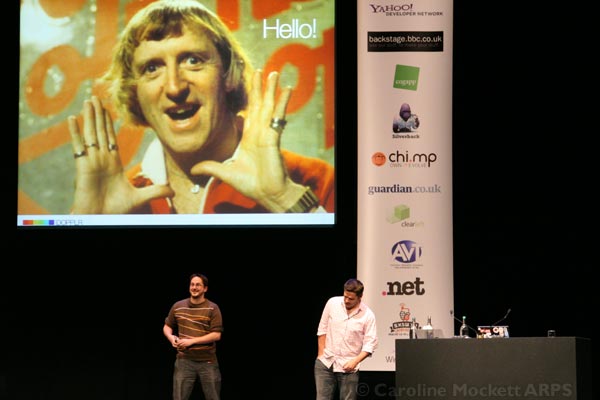 Clearlefter Jeremy Keith wrapped up the event with a thought-provoking session entitled The System Of The World. There doesn’t seem to be an adio transcript of that available.