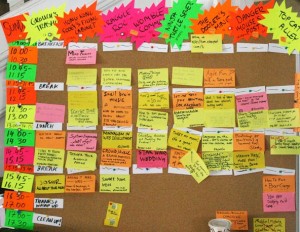 I’m finding this a really difficult post to write. But I hope those involved will take it as an honest account of my experiences rather than any sort of flame. It’s certainly not intended as such.

I have just been to BarCampBrighton4, and I have to say I found some aspects of it quite disappointing. I know I’m not the only one, and so that is why I’m sticking my head above the parapet with this post.

Having been on the organising committee for BarCampLondon6 and now 7, I know how much hard work is involved in running a BarCamp. And I can appreciate how dispiriting it can be to have people complaining about things when you have put so much effort into getting the thing off the ground. I do not wish to detract in any way from the achievements of the Brighton organisers, not least because of the necessity for a last-minute change of venue – a BarCamp organiser’s worst nightmare! 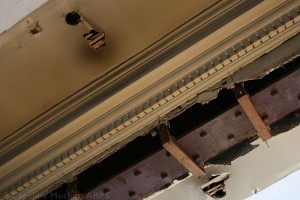 But I’m afraid it’s the venue which really did take the shine off things for me this time around. As a daytime session space, I thought it worked pretty well with areas spread across three floors. Some adjacent pitches were a little noisy and hard to hear the speakers, but there’s not a lot you can do about that. Where it really fell down was as an overnight venue. With no permanent lights or toilets, I personally didn’t feel it was a suitable overnight space. And I’m not just being picky, there are plenty of practicalities to take into account.

At one point in the afternoon, I was seriously considering going home early. And that’s never happened to me at a BarCamp before. I really really did not feel comfortable about staying in that building for the night. Fortunately, @vickyjo came to the rescue and very kindly agreed to our late-afternoon appeal to let myself, @tnash and @carolynlyn have some floor space at her flat, even though she was already accommodating @NeilCrosby and @alistair. So huge thanks to her for putting up with us at the last minute!

As a veteran of numerous overnight BarCamps, I’m not averse to sleeping on the floor. But it was very noticeable how many BarCamp regulars did not stay at the venue but made alternative arrangements. I wonder how many of those who I heard saying the venue was “awesome” actually had to stay there overnight themselves? Quite a few did not, but went home to the comfort of their own beds and flushing loos. And some other regulars who did stay over told me the next day that I was very wise to have gone elsewhere! 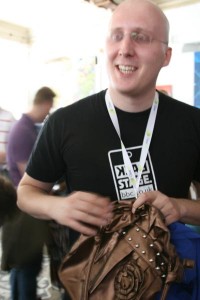 I think the main point I’m making about the venue is that the lack of basic facilities weren’t made obvious to campers before they arrived. The 3rd Sept blog post certainly made no mention of the situation with lights and portaloos. If it had (or even earlier would have been preferable), it would have been much easier for us to make up our own minds and then make alternative arrangements in good time if we felt so inclined.

Having said all that, there were plenty of good things happening during the event, and I particularly enjoyed sessions by @tobestobs (CSS3 Browser Support), @edent (Star Wars Wedding on a Budget) and the one on High Altitude Balloons – which seemed to give rather a lot of those listening some worrying ideas!!

I liked the idea of using recycled bags as schwagbags – which lead to some rather amusing images of geeks wandering around with the most inappropriate hand luggage! [see Cristiano right] And the technology swaps table also attracted some interest throughout the event. I hope there wasn’t too much old tat left at the end which the organisers had to dispose of!
[Alistair checks out a “Crap Soldering Iron” below]. 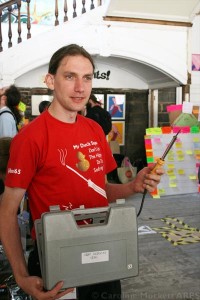 After last-minute sponsors came forward, the event was also fully catered and the food was plentiful and pretty tasty. I confess I wasn’t around for the pizza on Saturday evening, so I can’t comment on that. There was an urn to make tea and coffee and self-service cold drinks. Even a couple of days before the event it was looking like we might have to buy our own lunches – which actually would not have worried me too much. But it was nice not to have to do that.

There was a good mix of old and new faces in attendance. I hope the newbies enjoyed their first BarCamp experience. And I heard lots of the regulars did enjoy themselves and had a great time. Would I go to another one at this venue? Probably, but I would make sure I had alternative accommodation arranged well in advance!