Following on from Part 1, the next stage is to explain how the BBC Micro actually interfaces with the organ to control the notes.

The Switching Circuit in Parallel

The analogue switching circuit for each note looks like this:

The value of each note, ON or OFF, is stored in a 1-bit data latch

The LEDs were originally provided to facilitate trouble-shooting at the development stage, but now provide entertainment for interested spectators! It will be noted that the components are grouped to correspond to the layout of keys on the keyboard:

Here is a short video showing the switching boards whilst the organ plays a familiar tune… (use http://cazm.eu/ernie2u as a shortcut):

The diagram of a sample latching circuit is shown below – there are 4 latches per chip, but there are only two clock lines, each one clocking two latches.

Each latching operation requires two data bits to be distributed to all latch pairs simultaneously, via a network of 74LS04 inverting buffers to provide the necessary fan-out

Each of the 32 5-bit addresses points to a pair of latches, so giving access to a maximum of 64 individual latches. There are only 54 notes on the manual organ, but some of the spare latches are used for  auxiliary functions, including the operation of the master switching transistors in th 14V supply to upper and lower halves of the analogue switching board. 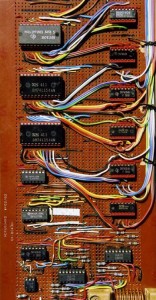 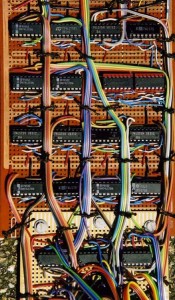 [Far Left: Opto isolators Decoders and Buffers of the  address routing circuit board]

[Left: Latches and Buffers of the latch circuit]

Much of the above hardware is duplicated to provide independent operation of the 30-note pedal organ, but this needs only one additional address line to distinguish between the two sections.

Operation of the above hardware is controlled by a machine code program running on the BBC Micro. A user interface in BBC BASIC, normally running in MODE 6, controls the display, selection and loading of items from the music menu. Prior to the transfer of control to the machine code there is provision for setting a number of playing parameters, whose values are passed via the Resident Integer Variables.