I’ve long been a fan of Wallace & Gromit‘s mad contraptions – the sort of machine that makes life infinitely more complicate than it really should be, just to get a simple job done. Well I hadn’t realised until recently that these are in fact Rube Goldberg Machines.

I was reminded of this last week when a friend showed me a brilliant YouTube video called “How do you take your portraits?”

At the end of that, there were some other suggestions, which inlcuded:

And my favourite has to be:

This Too Shall Pass – OK GO

There are loads of others if you just search for Rube Godlberg Machine.

My Own Feeble Attempt

These great examples set me thinking… maybe I could build one too? Well, I found a few bits and pieces and stuck some stuff together. Originally I had about 7 steps, but the first one was terribly unreliable and often I didn’t get beyond step 2. Here’s what wassupposed to happen: 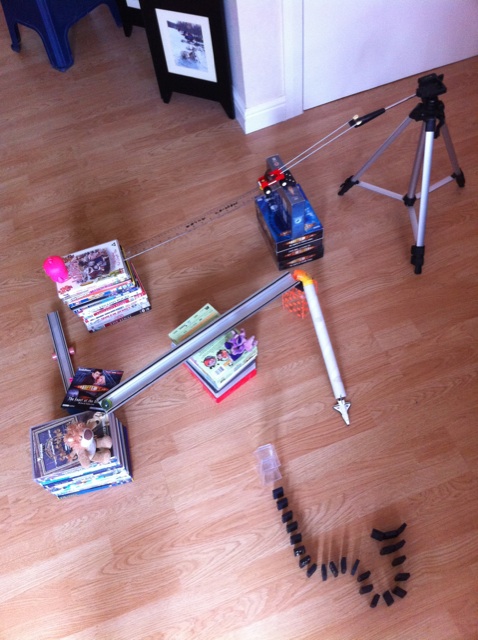 Eventually, I gave up and did a simpler redesign giving us Dai & Leo’s Rube Goldberg Machine – which runs to a pathetic 9 seconds! But hey, I had a go!

I can feel ContraptionCamp coming on – who would like to join me to build a bigger, sillier machine sometime?

1 Response to Anyone For ContraptionCamp?