After the abortive attempt at BarCamp London8 back in the summer, which resulted in a weekend HackCamp organised at the last minute, the real deal BCL8 finally happened during the second weekend of November.

The venue was the very nice City University in Clerkenwell – I would say, almost ideal for a BarCamp in terms of rooms, facilities and hospitality. 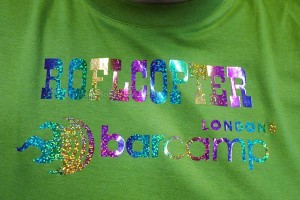 Unlike BCL6 and BCL7, when I was on the organising committee, I stepped back a little this time (I decided I couldn’t afford the time or cost of all those trips to London for planning meetings), but I was happy to volunteer for duties over the weekend, knowing the ropes and what was expected.

The custom-made t-shirts from Spreadshirt went down a storm again. As you can see from the picture, the Hodge made a special effort at being OTT and went all spangly for his design.

Like previous BarCampLondons, we all had great fun but it was hard work. And coming as the third consecutive weekend of geekery for me (following BathCamp3 and LeedsHack), I was about ready to drop by the end of the weekend. Hence I might not have been as lively as some, come Sunday evening!

I was on reception for quite a while, and it was very gratifying that loads of people, particularly the newbies, said they had had a great time as they left. Here’s to BCL9?

Some of my best images from the weekend: