I wondered whether to post this in my photographic blog, but decided this bit of the game was really more for the geeks amongst my readership, and would therefore fit better in this blog. For future results, I will post in the photography blog, so don’t expect to see much on that here.

For a couple of months, I’ve had my Camara Axe Arduino shield kit in a box waiting to be put together. I imported it from the States as it seemed one of the most versatile ways to control flash sync timing in a reasonably cost-effective way. I have done some manual shots with flash and liquid droplets, but have really reached the limit of what I can do effectively with timing by hand. (For more info, see the presentation I did for BarCamp Nottingham in July.) Anyway, today, I finally pulled my finger out and constructed the kit. Those less willing to do a bit of DIY have the option of the more expensive ready-built version.

It’s based around the popular Arduino Uno open source hardware. I bought my Uno from the lovely folks at Oomlaut in the summer. The Camera Axe Shield v5 (CAS5) acts as an additional board with specialist I/O hardware and LCD screen, which piggy-backs onto a regular Uno. It comes as a custom PCB with all the discrete components and LCD screen required to make the shield: 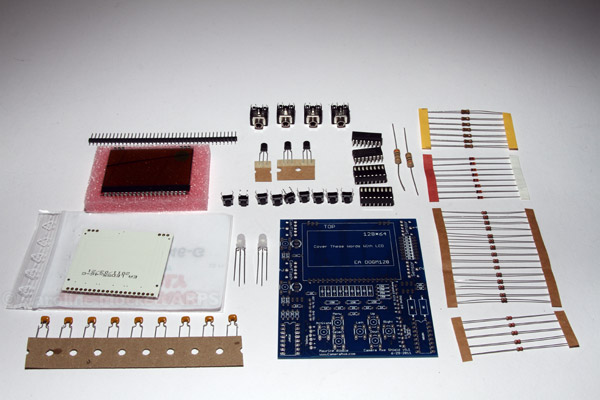 Maurice Ribble is the CAS5’s designer, and he is terribly helpful if you need any questions answered. The CameraAxe Wiki also has a very easy to follow step-by-step guide to building the kit. I had absolutely no problems seeing where everything should go, and once my rusty soldering skills were honed a little, I was reasonably fast in putting things together. Not quite as fast as the great little stop-motion video of the folks from TechPhotoBlog constructing the kit! 😉 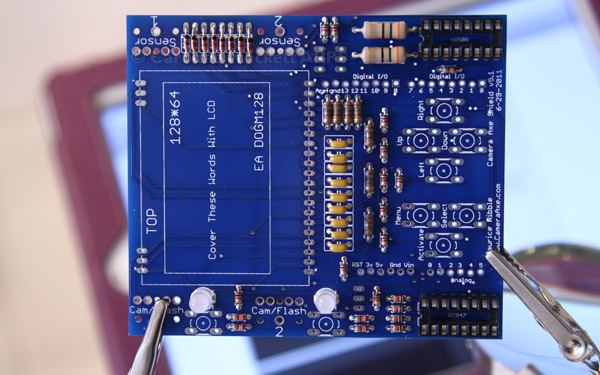 A few hours, a lot of soldering and a couple of minor burns later and it was done! I did manage to avoid setting my  hair on fire this time, which has been known in the past. The smell of singed hair is pretty awful, so I was glad I didn’t do any damage to my locks! 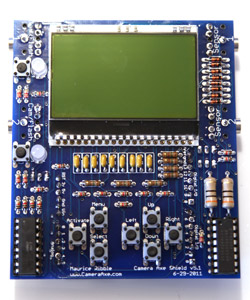 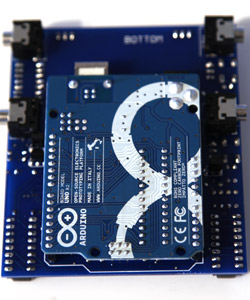 Shield rear with Uno board

I’m pleased to say that once the CAS5 software was loaded onto the Arduino board, the shield booted up and showed me a nice menu first time – hurrah!

But then I depowered and repowered and it appeared to be dead! Minor panic, until I realised I was using the Uno R2 board, some of which require a very minor mod by adding a diode which prevents a big voltage spike on startup (this apparently upsets the CAS5 board until the software is re-loaded again). I also need an external PSU for the Arduino, since I don’t necessarily want to have to have it connected via USB to my netbook every time I do a shoot.

I guess now I should really learn how to use the thing! It is quite complicated with lots of menu settings – each of which will need careful experimentation with the various different sensors I have also bought (Microphone sensor, Photogate sensor and the Valve sensor) to get optimum results. But as the long winter nights are drawing in again, it’s the perfect time of year to have a play and see what I can achieve. Watch the other space!

This entry was posted in hardware hacking, technology and tagged arduino, arduino uno, camera axe, diy, electronics, high speed flash, photography, soldering, What's that burning smell? Is it my hair? No it's just my fingers this time. Bookmark the permalink.